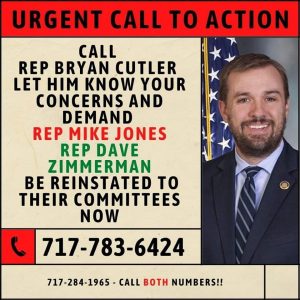 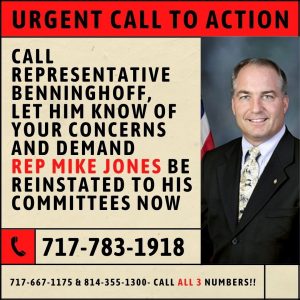 The Republican House leadership has become incensed after a rare act of courage and conviction by a brave representative who dared to not be controlled by them.
The party establishment expects representatives in the PA House to be loyal to THEM, not to their constituents, and certainly not to their own convictions. Nearly all representatives fall in line, because if they don’t, leadership reacts with punishments.
Rep. Mike Jones went against the grain and supported two challengers to longtime incumbents Stan Saylor and Keith Gillespie. You can read about why Rep. Jones thought it was time for a change in this article.
Just like any other voter, Rep. Jones has the right to support whichever candidate(s) he chooses to support, and is under no obligation to always support the incumbents. This is why we have primary elections.
The Harrisburg political establishment doesn’t like to be challenged. When voters complain about them not living up to their campaign promises, or say we need term limits, they arrogantly tell us “that’s what elections are for”, knowing full well it’s very difficult to unseat a long-time incumbent.
They know it takes a lot of money, time, and hard work to beat a seated incumbent, and they don’t think the outsider candidates will be able to pull it off, if they even mount a challenge in the first place.
But then when we do finally unseat an incumbent, they get very angry, and almost always seek revenge.
In the case of Rep. Jones, they have now stripped him of all but one of his committee assignments, simply for endorsing two outsider challengers over two long-time party insiders.
They’ve done the same to Rep. Zimmerman for simply supporting 70+ grassroots organizations who are demanding secure elections. Seems like a reasonable demand, but yet, Republican leadership is punishing him just for voicing his support.
Speaking of secure elections, you are probably aware by now that candidate Dave McCormick is suing to have undated ballots be counted, which is prohibited by state law.
In another case, long time Republican incumbent Sen. Pat Browne wants illegal “naked” ballots to be counted in his race after he narrowly lost his re-election.
All of these politicians campaigned on wanting our elections to be secure, saying we should follow the letter of the law, and yet when they lose, they do the exact opposite. Is it any wonder why voters have been rejecting establishment candidates in favor of outside challengers?
Representatives Mike Jones and Dave Zimmerman deserve our full support. It is rare indeed to see elected officials stand up so strongly against the leadership of their own party, who are not doing what’s right for the best interest of their constituents.
Rep. Jones and Rep. Zimmerman did this knowing they would be punished. Now it’s time for us to stand up for them and demand they be put back on the committees they were previously serving on.
The actions taken by Majority Leader Kerry Benninghoff and Speaker Bryan Cutler to remove these two statesmen from their committees are not only childish and unbecoming of an elected official, it is also insulting to the voters who made their decisions on election day.
Career politicians like Kerry Benninghoff view politics as a closed-door system where only THEIR chosen ones are allowed in, not caring what the voters and the people have to say. They only want people they know they can control to be elected.
We need your help to stand behind Rep. Jones and Rep. Zimmerman.
There are two easy things you can do. You can call Rep. Benninghoff and Rep. Cutler to demand Rep. Jones and Rep.Zimmerman be reassigned to their committee positions.
You can also attend an event where Rep. Jones will be giving a presentation about how to drain the Harrisburg swamp. It will be held on June 7th in Orwigsburg at the Grace Bible Church, located at 12 Molino Rd. The event begins at 6:30 P.M.
Thank you so much for your time. When we finally get politicians who stand up for us, we need to have their backs, or else we can’t expect them to continue to fight the way we need them to.
Please call today to demand Mike Jones and Dave Zimmerman be reinstated to their committees.
For Freedom,
Ron Boltz
Chairman
Pennsylvania Liberty Fund